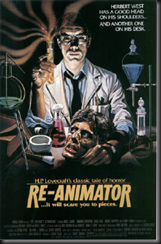 The Re-Animator Series, so far consisting of three films, is an example of a series of horror movies done right.

Starting in 1985 with the Re-Animator, and consisting of three films, though the door seems to be left open for more. All three star Jeffrey Combs as Herbert West, the Re-animator himself. West is a driven, mad scientist that developed the “Re-Agent”: a neon green liquid that brings life (or at least re-animates) the dead. This is West’s life’s work and he allows nothing to come between him and it.

Starting with the RE-Animator in 1985, we’re introduced to  West in a quick but disturbing scene at the University of Zurich Institute of Medicine, where he is found hunched over the convulsing body of Dr. Gruber. Accused of killing Gruber, West shouts “I gave him life!”

Next we see West arriving at Miskatonic University in New England to continue his studies. Immediately he is at odds with Dr. Carl Hill, the university’s resident Brain specialist, and primary grant gatherer, when he states that Hill’s work is derivative and basically stolen from the late Dr. Gruber. Immediately in Dr. Hill’s bad books, West’s further behaviour does nothing to rectify this.

Soon, answering an add posted on a bulletin board for a room for rent, West moves in with Dan Cain, another med student. Dan, we learn is dating the Dean’s daughter, Megan Halsey (played by Barbara Crampton). Megan, from the start, does not like West, and shortly after his arrival, accuses him of killing Dan’s cat when she enters West’s room against his wishes and finds the cat’s body in his fridge. West denies killing the cat and claims he found it dead and put the body in his fridge until he could inform Dan of the event. Very quickly, West draws Dan into his world and has him working on the Re- Agent with him – all it took was finding West in his basement lab being attacked by the newly re-animated cat of Dan’s.

Once sucked in, Dan becomes in effect West’s version of Igor. Disgusted by West’s lack of care for fellow humans, but driven by the work he does, he becomes VERY subservient to the ever more singularly focused West. Also, along the way West draws him into a web of crimes that leave Dan no choice but to stay by West’s side.

Everyone around Dan and West’ are in danger due to West’s lack of care for fellow humans. All that matters to him is the development of his RE-Agent. Anyone that gets in his way becomes victims. Dr. Hill, after trying to take West’s discovery and life’s work from him though blackmail becomes nothing more than an animated head, though with the ability to control others that West has animated – causing West much more trouble than one would think a solitary head could. Most that are re-animated via West’s RE-Agent, come back violent and almost mindless. Eventually all hell breaks loose and Megan becomes an accidental victim to West’s experiments…

The second movie, Bride of the Re-Animator, was released in 1989 and starts off with West and Dan, working in a war zone tent hospital – West is his normal, driven maniacal self and Dan his normal, subservient wimpish self. We see them apply the Re-Agent to a dead soldier, just as an attractive female soldier enters, Francesca Danelli (played by Fabiana Udenio) – the patient – violent as usual, is shot by West, and this is witnessed by the Francesca. Other than a “What are you people doing here” and a “we have to bug out as we are being over-run” type of discussion (and a hint that Dan and Francesca may have a thing for each other), this scene is over fast.

Next we find that West and Dan have returned to New England and their jobs at Mikatonic University Hospital, where they also continue work on the Re-Agent. A new development shows West that Re-Agent can also reanimate individual body parts as well as entire organisms. He starts taking individual body parts home to continue his experiments. It’s the theft of these parts that puts police officer Lt. Chapham on the trail of West and Dan. That, and the fact that Chaphman has it out for them already as the only ones to survive, unchanged from the events of the first movie. Soon we find out that Chapham has a more intimate and personal reason to be interested in the case (watch the damned movie to find out what it is). Chaphman’s pressure on West and Dan leads to mistakes being made, and individuals being reanimated – in short, things fall to shit. Add to all this that West’s original nemesis from the first move, the head of Dr. Carl Hill is controlling these reanimated jerks. All the while, West is attempting to create life from individual body parts. Using a terminal patient that Dan has fallen in love with as the face and head, in order to get Dan onboard, eventually West creates his parted out monster – a jealous giant of a woman-beast. A big fight breaks out and shit goes to hell again.

The third (and last so far), movie was released in 2003 and titled, Beyond RE-Animator.

13 years have passed since crap went down at the hospital. West has spent that time in prison after Dan turned State’s Witness. West has managed to continue his experiments, albeit on a much smaller scale, working on rats in his cell.

The prison hospital gets a new, young head doctor who quickly takes an interest in West and his past work. Dr. Howard Phillips arranges with the crazy, asshole Warden to have West put on work detail in the hospital, using the excuse that the hospital is understaffed and West’s medical background would help things. The Warden agrees, but lets his dislike of West be known to Phillips. Phillip soon informs West that he is aware of his work with re-animation of the dead and explains how his sister was killed by one of the zombies that was created in the event that sent West to prison. He was a kid at the time and one of the un-dead created with West’s Re-Agent broke into their house and killed his sister. He saw the police take West away in a police car. He learned of West’s work and made it his goal to work with him and learn the secret of RE-Agent. Soon West draws him into his world after they reanimate a recently deceased prisoner with a 13 year old sample of RE-Agent that Phillips found back when his sister was killed. The prisoner wakes from the dead in a state of confusion and violence, just as the Warden was touring through the prison’s hospital with attractive reporter Laura Olney. The Warden freaks out about the whole ruckus and puts everybody on lockdown and cancel the rest of the tour of the prison/interview, but not before Laura and Dr. Phillips manage to make oggly eyes at each other and make some kinda’ love connection… because all of a sudden these two are an item.

Like all these movies, West draws his side kick, usually Dan but now Dr. Phillips deeper into his twisted world of mad science and reanimating of the dead. West’s experiments during his years in lockup led him to discover Neo-Plasmic Energy (or NPE for short). NPE is harvested from a donor and consists of an electrical like energy which when administered right after Re-Agent, creates a way more life like reanimated subject. Instead of your crazed, mindless homicidal reanimated subject, when NPE is applied, the subject doesn’t decay and seems to keep their humanity. A strange and funny transformation occurs when West reanimates the Warden and applies the NPE gathered from a rat – it’s awesome.

Like all these movies, things get out of hand, and eventually it’s hard to tell who’s been reanimated and who hasn’t been. There’s a riot in the prison and the prisoner’s take over. Laura, who was killed by the Warden then reanimated by West and his new NPE process gets killed again. Phillips is left, mind bone and looking like a psycho-killer.  He’s arrested for the murder or Laura. West, posing as Dr. Phillips (after taking his identity card) escapes in to the night.

These movies are excellent and deserve to be watched. Jeffrey Combs is masterful in the role of Doctor Herbert West. They have a very unique feel to them that I think only Stuart Gordon and Brian Yuzna can create. My descriptions of these movies did them a dis-service and I really strongly suggest you watch them.