Have you seen Tucker and Dale Vs Evil? If you answered no to that question then go watch that, and then come back and read this.

Starring Tyler Labine and Malin Akerman as Todd Chipowski and Cammie Ryan, a young couple planning a week long romantic vacation at Todd’s family cottage. Once there, Todd plans on proposing marriage to Cammie. Once there, they are interrupted by Todd’s brother Salinger and his whacked out Euro trash girlfriend. Things get weird and wacky and some one ends up dead and then the fun starts. Ad a crap load of unexpected partiers and a very curious mystic friend… and another death, and then some lies and you have this movie.

Very obviously a Canadian film (that’s an observation, not a condemnation), the movie is a little jumbled, and it looks like they tried to go in two many directions at once and missed the mark a couple of times. Todd, to me seems like a cleaned up evolution of Tucker from the aforementioned Tucker and Dale Vs Evil, proving again that Tyler Labine can be funny in similar situations… But you know what? This movie made me laugh quite a bit, and to me that goes a long way.  A bit of a mess at times, I still say go ahead and watch it. My cable has it on Video On Demand, so it’’ should be pretty easy to find.

Halloween 6 The Curse of Michael Myers (1995)–Why Did This Have to Be Your Last Film Mr. Pleasence? 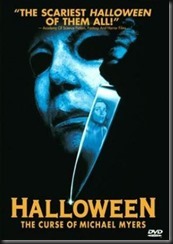 Let’s get this straight: 1978’s Halloween was a seminal, ground breaking film in the Slasher/Horror genre. Let’s get another thing straight: Halloween 6 The Curse of Michael Meyer is not.

Obviously looking at cashing in on the already tired Halloween franchise, this one puts the blame for Michael of some ancient curse/alignment of the stars that only happens on certain Halloween’s.

This movie sucks. They brought back the usually great Donald Pleasence, who seems frail and weak in this film – heck he passed away very shortly after completing this film, and it also stars a young Paul Rudd. Unfortunately they couldn’t secure Daniel Harris to revise her role as Jamie from the two Halloween movies prior to this one – She was too smart and they were too cheap to pay her.

You know, I could tell you more about the actual movie but I won’t waste you or my time doing so. Let me just say that your time would be better spent watching any number of other movies… Check out the original Halloween or even Rob Zombie’s remake.

This movie is boring.

Bounty Killer (2013)–A Silly But Entertaining Homage to Corman Films 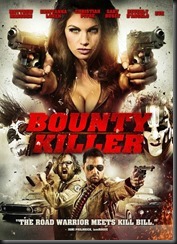 2013’s Bounty Killer has been touring the movie circuit (recentlyplay at Edmonton Alberta’s Dedfest), and having recently watched it, I thought I should tell you a little about it.

Starring Christian Pitre as Mary Death and Mathew Marsden as Drifter, two Bounty Killers competing for fame and fortune in a post apocalyptic world. Like bounty hunters of today, but always bringing in their bounty dead (simpler that way). They’re pretty much against the establishment – until the establishment is destroyed by a giant Company – then they join forces to kick some corporate butt.

Oh, and there’s some personal history between Drifter and Mary Death

This feels like someone put a whole bunch of Roger Corman ideas in a blender and came up with a modern version of something that would be at home at a 1970’s drive in theatre. This is not a good movie but it is a sure a fun movie. 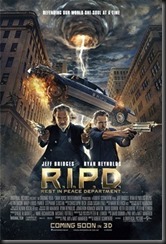 I recently watched the new release, R.I.P.D. and was pleasantly surprised. Starring Jeff Bridges and Ryan Reynolds as two deceased policemen, now working as cops in the afterlife, rounding up te\he Dead that just refuse to leave the living world.

Ryan Reynolds’s character, Nick, was partnered with Hayes (played by Kevin Bacon), two cops in the living world. The two of them are well meaning but slightly crooked cops. When Nick decides it’s time to stop being crooked, Hayes decides maybe it’s time for Nick to go on to the other side. Once their Nick finds himself in front of Proctor, a police woman (or administrator) played by the always great Mary-Louise Parker, who informs him he has two choices: work as a cop in the afterlife, rounding up badies that refuse to go on to the nether world, or take his chance with judgement…after being a borderline bad cop. Deciding to take the role of a cop in R.I.P.D. He is partnered up with Roy, a cop that got his start as a Marshal in the Wild West, who has some serious issues with the way he died… and some seriously funny stories about what happened shortly after his death… Damned coyotes. The two decide to investigate the fact that the “Deadies” (the dead that won’t leave the living world), are ramping up activity and gathering some weird chunks of gold. Turns out there’s a bid plan that they are trying to hatch that will change the world as we and they know it. Of course, Hayes plays a hand in this too – he’s much more bad than we first thought (well, kinda – you kind’ know he’s dirt bag).

This is a fun movie with lots of great looking “monsters” and story that made me laugh. Silly, yes, but completely fun. Watch this movie if you want a good laugh. I especially enjoyed the interesting relationship between Roy and Proctor, as well as James Hong running around with a banana (don’t worry: that sentence will make sense once you watch the movie). 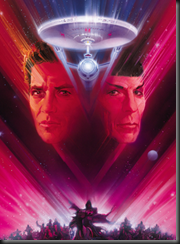 So, there’s report of trouble on a planet that is a social experiment with the Federation,Klingons and the Romulans – they are trying to find out if we can all live happily together. Some charismatic cult leader has taken over the place and the only folks who are close enough to do anything about it…are the the crew of the Enterprise. They show up and are quickly captured. Some are sort of hypnotized to follow their leader – a Vulcan by the name of Sybok, (played by Laurence Luckinbill), Spock’s half-brother, who is offering freedom from fear and pain, and on mission to the center of the Galaxy – to see the face of…I dunno’… GOD? Yeah, and there is a Klingon Captain that wants to make his points by killing the infamous Kirk. Oh… I can’t continue.

UGH!!! I really disliked this freakin’ movie. Go ahead an watch it if you need to. I liked this movie more when I first watched it, but really didn’t like it much then. I don’t need my Sci-Fi heroes looking for God, and Shatner is NOT A GOOD WRITER/DIRECTOR. I like William Shatner a lot and this should be his “Popeye.”

Here is the trailer for this terrible Trek movie: 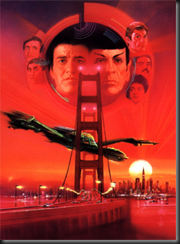 On to episode four of the Star Trek movies.

Hmmm… Where to start? Taking place almost immediately after the last movie, The Search For Spock, The Voyage Home has the crew of the Enterprise heading for Earth to answer for their actions in that past movie.Well, on their way back they get news of an alien probe that has been leaving a trail of destruction while making directly for Earth. Along the way, it is continuously transmitting a strange, seemingly unintelligible signal. Once the probe reaches Earth, it starts directing it’s signal into the depths of the oceans – and not getting any reply, it starts vaporizing  said oceans.The crew of the Enterprise, now the crew of a Klingon Bird of Prey are tasked to find a solution to this problem. The still adjusting from returning from the dead Spock does some calculations and figures out that the signal is actually the call of the now (23rd century “now”), extinct Humpback Whale. Figuring that the only way to save the planet is to find some Humpback Whales, the crew decides to travel back in time and gather a few whales. They whip around the sun to travel back in time and end up in 1980’s San Francisco, where they soon discover that their are two Humpbacks at a Sea World like complex. They land the Bird of Prey in Golden Gate Park (thank you Klingon Cloaking device) and head out into the city to look for whales…Oh, and nuclear material…yes, they need nuclear material for the now fried Dilithium crystals. So for the next bit, the crew goes around San Francisco, making stupid mistakes (they are not part of this culture,folks), while trying to round up whales and nuclear materials.

So, typically, Kirk woos a marine biologist who is taking care of the whales in captivity, and one of the other crew gets captured (and injured badly), and there has to be a sneaky rescue…of course.

So the movie is funny in places, serious in others and addresses important environmental and ecological issues. Hell, I know many people who think this is the best Star Trek movie… I’m of the opinion that it is one of (but not THEE), worst Star Trek movies. Just too much “save the world” hippy crap. It’s still fun, just not my favourite.