Shaky Cam Week Movie 1 – Paranormal Activity: The Marked Ones (2014) –Maybe They Should Have Stopped After The First Few 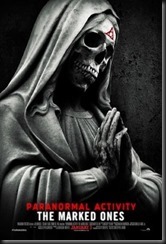 The first Paranormal Activity movie back in 2009 was a scary, effective and unique horror movie. It was pretty damned good, actually. The next couple were still pretty good, but eack, in my opinion, was a little less good than the previous movie. With The Marked Ones, it’s just redundant and getting pretty boring now.

So some young adults/late teens stumble upon some black magic, manage to raise something from the depths of darkness, and now they are marked for death and one of their own is seemingly becoming possessed and has superhuman strength and psi powers. Oh, and they communicate with the evil spirit by using an old classic Simon game. Of course they try to defeat evil and get to the bottom of whatever is going on…

Okay, I am sorry, but this franchise is done for me. It should have been done with the second movie, but definitely should never have progressed past the third movie. If this is your thing, then go for it, because it’s not absolutely terrible, I just find it increasingly uninteresting.

Come on, make a NEW movie.