Something Evil (1972) – Did They Mean Something Crappy? Ah, But I still Had To Watch…

So, I went searching for a movie that scared the hell out of me as a very young child. All I had were vague fragments of memories: a baby crying, an evil goop in a big jar and a design on a floor. I found what I was looking for, but maybe I was better off before I searched!

Watch my semi-review of 1972’s Something Evil: 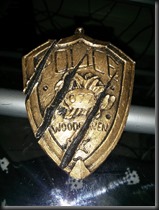 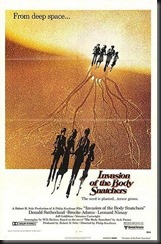 1978’s remake to the 1956 classic movie, Invasion of the Body Snatchers is in itself a true classic of Sci-Fi horror. Starring Donald Sutherland, Brook Adams, Leonard Nimoy and a very young Jeff Goldblum (among others), this great casted movie tells the story of an Alien Invasion of a most insidious sort. You see, and alien life form has appeared as an attractive flower… Only problem is the flower eventually creates a duplicate of yourself, while you whither and die. New York is now full of Zombie like individuals, who seem to be able to communicate without the need of verbalizing. Friends and family members, not yet infected are reporting that their affected loved ones seem to have been replaced, and that only the outside resembles them. The infestation spreads exponentially, and the unconverted are hunted by the converted. Some have learned that you can fool the duplicates if you keep to yourself, and show no emotions. Of course, how long can someone go on like that?

Invasion of the Body Snatchers does a good job of creating a very creepy mood, with a combination of filmography, great casting and a fantastic use of ambient sounds and anxiety creating music. I think another reason this movie seems scarier than most (to me at least), is that the people affected seem like real people and not just characters on a page. Also, the fact that it all takes place in a normal cityscape and not removed in space or in the far future makes it seem just that more real. If you like Sci-Fi and Horror then you’ve got to watch this one. Easily one of my favourites of this genre,, I have watched it many times and will watch it many more tomes before this mortal coil is done. Also, if you like this one, definitely check out the original, too as it also ids a fantastic story/movie.

Alien Horror Week – Movie 3: Killer Klowns From Outer Space (1988)–Now This… This is A Movie You Should Watch 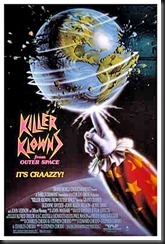 1988’s way over the top, Killer Klowns From Outer Space tells the tale of a group of evil aliens that come to Earth, specifically Crescent Cove, California, in their space craft  to harvest humans. Pretty typical of a Sci-Fi horror film, I know, but these aliens look like demented clowns, and their space ship looks like a giant circus tent.

Starting off with a farmer going to investigate what looked like a comet that has fallen to Earth (he thinks it is Halley’s Comet), and stumbling across the Circus tent like Alien spacecraft, he and his dog are quickly captured by the Aliens. Now, of course the Farmer wasn’t the only one to see this shooting star like object. Mike (Grant Cramer), and his girlfriend Debbie (Suzanne Snyder), decide to also check it out. They find the spacecraft (just like the farmer did), and manage to find a way in, where they discover the remains of the farmer and his dog, cocooned in a cotton candy like substance (hey – they’re alien clowns… errr “Klowns”), and themselves just barely missing being capture by one of the aliens. After a hairy escape (including being chased by a balloon animal, they head to the police station. They tell their story to officer Dave Hanson (John Allen Nelson), who happens to be Debbie’s ex boyfriend. The story, of course sounds ridiculous – I mean, really? Space Alien Clowns? Bodies cocooned in cotton candy? It’s fair to say that Dave is is sceptical, but his fellow officer, the gruff jerk of a cop Mooney (played by the awesome John Vernon) calls them outright liars and wants to put them in jail for making up stories about murders and such. Dave at least agrees to chesk out what they are saying as they did say a couple of people were killed. Dropping Debbie off first (against her wishes), Mike takes Dave out to where they found the ship and the bodies, but unfortunately the ship is no longer there and Dave thinks they made the whole thing up and places under arrest. Well with the clowns loose in the town and more and more people falling victim to their ridiculously amusing weapons and ways, Dave and Mike don’t get far before Dave sees for himself the Killer Klowns and what they are capable of. Meanwhile, back at the police station, Maloney has himself that the entire town is trying to mess with his head with a coordinated series of call from all over town about killer clowns. When Dave calls into the station and instructs Maloney to call for back up, describing the Klown menace, he just thinks Dave is in on the whole thing to and refuses to get or give help. It’s not until one actually strolls into the station that he actually realizes this isn’t hoax. Of coarse, by that time… well, you know. So it’s all up to Mike, Dave and Debbie to infiltrate the Klown ship and save the day… Okay, I left a whole bunch out there at the end because I realized I was just rattling off the movie instead of reviewing it. I don’t want to do that. What I do want is for you to watch this movie because it’s cool, crazy and funny and desreves to be watched by soimeone who can appreciate it for what it is: a fun movie.  No one can argue that it isn’t original – Hell, I doubt there is any movie that even resembles this film. A crazy concept, wrapped in a funny script and created by people that must love the genre, this is a film for any Sci-Fi/Horror or Comedy fan. Yeah, it is ridiculous, but it is supposed to be so. Sure, if you watch this movie expecting it to be a serious horror/sci-fi film, you will be mistaken – and most likely stupid, too. I mean, really: it’s about Killer Aliens from space that travel in a Circus tent space craft and look like demented clowns. Still,

it’s great ands it’s fun and you should watch it. Oh, you already saw it? Well, see it again!

So, this week is dedicated to Alien Based Horror movies. I expect a few possible turkeys, but I believe it’s going to be fun anyway. I am a fan of Science Fiction (Sci-Fi) and horror, and the two mix reasonable well at the hands of competent film makers… and some horribly awesome films when created by bad film makers. I hope we get to see both sides of the coin this week.

We haven’t filled the roster of films yet, so if you have a suggestion or two, feel free to send them on over by using this link:

Send In Your Suggestion For Alien Horror Week