The Conspiracy (2012)–Interesting, If Wordy Mocumentary

Watched the 2012 Canadian mocumentary movie, The Conspiracy. It is kind of wordy but pretty interesting. Check out the video for the full review!

Jackie Brown is such a throwback to the Blaxploitation films of the 1970’s that I almost think that Tarantino travelled back in time to gather up some magic, earth toned 70’s mojo to pack into this film… or not.

Starring Pam Grier (yeah, the tough chick from… those 70’s Blaxploitation films… see? I told you!), as Jackie Brown, a tough attractive flight attendant, who supplements her meagre wage by smuggling cash into the US from Mexico for a gun runner named Ordell Roberts, played by the seriously awesome Samuel L. Jackson. When one of Ordell’s mules gets caught and incarcerated, Ordell aranges for their bail, and kills them so they won’t turn informant. Soon after, Jackie herself gets caught by the feds bringing in cash and drugs (which were placed on her, without her knowledge). Refusing to testify against Ordell, she is locked up. Despite her refusal to talk, Ordell is still worried that she may talk to the feds, so he arranges her release, and plans on killing her too. Turning the tables on Ordell (a pistol will do things like that), she negotiates with Ordell to pretend to be working with the feds while smuggling a crap load of cash for Ordell.

This movie, like almost all Tarantino films, is freakin’ jam packed full of great stars. Honestly, here is a list of the stars in this crazy, throwback of a movie:

-This list was copied directly from the Wikipedia article on this movie which can be found here .

Oozing cool, Jackie Brown delivers 1970’s awesomeness, updated (just enough), for a (mostly), modern audience. If you haven’t seen this film, and like the style of Tarantino films, then this is for you. If you like your films, antiseptically clean, then walk away…and why are you reading this blog anyway?

Check out the trailer below, and why not watch this masterpiece tonight? 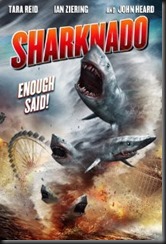 I think you can tell just by the the title that Sharknado deserves to be on thins blog, but watching it drives home that conclusion.

A terrible storm at sea is sucking up massive amounts of man eating sharks and depositing them on the streets of Los Angeles, where they are snacking on the residents of said city. Yes, the Los Angeles area has been affected by not one but three separate tornados full of sharks, or if you will, SHARNADOS!!!!! Of course, only a rag tag group od Sharknado survivors can save the day, and only by using stuff they find laying around.

This movie is absolutely terrible and yet it had me laughing BECAUSE it is so terrible. Should you watch it? Well, I say “Hell yes” but ultimately it is up to you.

I don’t knowhow many times I’ve seen the movie, Logan’s Run, but I know it’s more than 10 times. Why do I keep coming back? Must be the charm, because while it’s not a cinematic masterpieces, I find it compelling, and it’s concept interesting.

The story takes place in 2274, and the remains of humanity have been living in a domed, utopian like society, where all parts of living are taken care for you by a computer. Mankind lives for pleasure and there is no more struggle. There is just one trade off, though: You only get to live to the age of 30, and then you must enter “Carrousel” where you have the chance at renewal…though most likely you’ll just end up vaporized. To ensure no one exceeds their allotted 30 years, all humans are implanted with a life clock in their palm – a disk that changes colour as you age, and eventually flashes red when you’ve reached your time to enter carrousel. The majority enters carrousel with no issue, but some choose to run when their time approaches. When that happens, the computer sends a Sandman for you. A Sandman is basically a policeman who is entrusted to capture these Runners.

Michael York plays Logan 5, a Sandman who the computer decides to prematurely age (make his life clock blink, despite having several years left to him. This is done so he can run himself and find the legendary “Sanctuary” – a place spoken of by runners. Sanctuary is supposedly a safe place where you can live out your years past your allotted 30  years. Logan is forced to try to flee, as he is pursued by once fellow Sandmen. As he does he brings along a woman, Jessica (played by Jenny Agutter), who he believes my be sympathetic to runners and may have a clue as to where Sanctuary lies. After a few hairy situations, including a bad plastic surgeon with a young and sexy Farah Fawcett for a nurse and having to convince a group of dissidents that Logan is not a plant, and defeating a weird mirrored robot who’s job has been to process “nutrients from the Sea”, they eventually make it outside the dome, into the wild of the real world. After a few unusual experiences, and noticing that their Life Clocks are now clear, like a baby’s, they eventually find their way to the ruins of a city, Washington D.C. Once there they encounter an old man and his cats, played by the always great Peter Ustinov who tells of his life in the world, explaining how he lived with his birth parents (something quite alien to the dome dwellers). Convincing the old man to follow them, they eventually make their way back to the dome, leaving the old man waiting for them outside. Once in the dome, Logan is captured and interrogated by the central computer. When Logan’s answers cause a break down of the computer, the entire dome starts falling apart. Logan and Jessica lead the people outside where they encounter the old man… Queue credits.

Cheezy on many levels, Logan’s Run is still an important Science Fiction film (and book) that describes a world that some believed was not too far off. Aged, but entertaining, I heartily suggest this a s a watch.

So I watched the 2006 movie, Zombie Diaries last night. It was easily the worse zombie movie I’ve seen.

It was worse than Zombie Babies (which I also hated).

Everyone attached to this movie should have been banned from ever attempting to create anything artistic. And guess what? They made a sequel.

So… What’s wrong with the movie? It’s boring and poorly made. Oh, did I mention that it was boring?

Don’t watch this piece of shit.

Trailer? Oh, why the hell not:

In the 1950s, a group that entered and tried to get to the bottom of the hauntings ended in tragedy. The only survivor, a 15 year old physical medium named Ben Fisher survived. Now, in 1974, Ben (played by Roddy McDowell), along with physicist Dr. Lionel Barrett (Clive Revill), his wife, Ann Barrett (Gayle Hunnicutt) and spiritual medium Florence Tanner (Pamela Franklin) make up the new team that was hired to investigate.

The fist night together in Belasco House, the group partakes in a séance (or sitting). During this sitting, Florence claims to be channel a spirit, and in a weird, manly voice warns and threatens the group, while physical objects around the room are shaken and moved without anyone touching them. While the group is shaken up, Dr. Barrett believes that there must be a scientific reason for the events.

As the days go by, Florence is visited by what appears to be several spirits, but most notably, one claiming to be Belasco’s son, asking to be released. These visits seem to end with Florence being physically attacked – even by an evil, determined black cat.

Florence isn’t the only one being targeted – they all are. Ann Barrett, becomes temporarily possessed while sleep walking and tries to engage Ben in sex. Ben, realizing it is the spirit talking and not really Ann, slaps her awake – she comes to and runs away. – A note: Ann is pretty hot – Ben must have used some serious will power here-. Also, during another sitting, Dr. Barrett is targeted by flying objects that are hurled in his direction seemingly by invisible hands. Dr. Barrett, though, is still convinced that this can be explained scientifically.

Barrett has a large piece of equipment delivered to the house that I think drains the ethereal energy of the house – Florence attempts to destroy the machine but fails. Barrett starts up his machine and gets to work. While they are doing so, Florence gets up and enters the chapel of the house… where tragedy befalls her. While this is happening, in the room with the machine, Dr. Barrett believes that the machine has done it’s job, and even Ben agrees, declaring the home “clear.” Well, almost immediately a bunch of crap happens and Dr. Barrett is killed. Ann and Ben enter the chapel, and find Florence dead. Ben, coming to a realization, hurls accusations at the spirit, belittling it, and soon they discover a hidden chamber… and the truth of the evil Emeric Belasco…

Well, as I stated at the beginning of this post, I generally find British horror from this time boring , but I enjoyed this quite a bit. It was an interesting story and the acting was good. Not a lot of gore, but that’s okay. Should you watch it? That’s completely up to you.