Well, I think I should do a quick post regarding last week’s Vampire week as I have received a few emails regarding it and the choices…

I have received over 100 emails asking why I did not include the classic 1931 Universal film, Dracula, with Bela Lugosi, or even the Spanish version filmed at the same time on the same cast. Well, I have reviewed both in the not too distant past (favourable, I might add), and I thought that with the sheer number of Vampire movies, this would be a great opportunity to showcase some different films I have not seen yet (aside from Love at First Bite). And you know what? I am glad I did, as I was able to watch 7 great, and different vampire movies. To be honest, I can’t remember the last time I watched seven days worth of good films with a connected theme (aside from Tarantino week). The whole vampire myth has generated so many films that I was tempted to turn this into two weeks of Vampire films. I’m convinced that even with an additional week of movies, I would have managed to avoid watching a turkey of a movie. Yes, with this many movies to choose from, there would be no reason to watch Twilight, or anything like it.

Hell, I think a second Vampire Week should be planned! In fact, why don’t you send me your suggestions (good or crappy) for the next Vampire Week.

Send those suggestions by clicking HERE 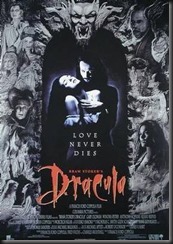 Starring the great Gary Oldman as Count Dracula, and taking place primarily in 1897 (with some important scenes happening in 1462). Count Dracula has decided to purchase several properties in London, England and his case has been handed to a new solicitor (like a lawyer), Jonathan Harker (played by Keanu Reeves, with the absolutely worse English accent I have heard in I don’t know how long). Harker has taken on Dracula’s portfolio from a Mr Renfield (played extremely well by Tom Waits), who has since gone completely insane. Harker must travel to Transylvania to meet with Count Dracula to discuss his plan to purchase Carfax Abbey. Once in the hands of Dracula, he soon finds that he is a prisoner. While there are some perks (there are some pretty sexy vampire chicks), he escapes, a changed man, and heads back to London. Dracula, himself changed from a decrepit, creepy old man, to a now dashing young gentleman, has put a spell on Harker’s fiancé, Mina (played by Winona Rider who also struggles with her accent… though nothing like Keanu’s). Oh… He also seduces, rapes and drains Lucy, Mina’s friend. Yeah, this is Dracula – he does stuff like that. Enter Van Helsing, (portrayed by Anthony Hopkins) everybody’s favourite Vampire hunter.

Okay – this is the classic Dracula story, retold in 1992 with a good cast and a big budget. Director Francis Ford Coppola did a good job bringing the story back to the screen in this very watchable retelling. Is it better than the 1979 version? I wouldn’t say so, but it is good enough to watch and enjoy. Also, it’s good enough to forgive that awful accent of Reeve’s. Check out the trailer below: 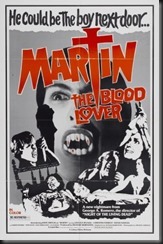 Martin is a weird film. John Amplas played the title role, a weird, young looking man who has come to live with his great uncle, Tateh Cuda, an Old World Man who accuses Martin of being a Vampire – referring to him as Nosferatu. It doesn’t help that in the opening minutes of the film, we witness Martin drug, rape and bleed a woman on the train he took to get to said Uncle’s house. Once at the house, his uncle instructs Martin forcefully not to speak to Christine (a cousin I believe), and then goes about trying various traditional Vampire repellents (you know, like garlic and crucifixes), but Martin let’s him know that there’s no real magic. Martin starts working at Tateh’s butcher shop and meets local women while making deliveries – these woman later become his victims (or meals, if you will). One of these women eventually becomes Martin’s lover (she’s cheating on her husband). She finds herself attracted to Martin’s quietness, and lack of opinions and judgements. Martin, at first, runs from her advances, but after talking over the phone (and on air), with a local late night DJ, he decides to give into her advances. At the same time, while speaking to the DJ, he tries to remove the mystery from Vampirism . The DJ’s audience just eats this stuff up, and Martin is a hit. Martin’s relationship with this woman changes his feeding habits, and the fact that his uncle forbade him from feeding on anyone from their already dying town, so he soon finds himself in Pittsburgh looking for victims. There he manages to feed well, but took chances  that almost got him caught twice. Sated, he returns home only to find his love interest has taken her own life. And that event triggers… another major event.

So we have a guy that may or may not be a vampire who is becoming a bit of an anonymous pop icon, sleeping with a local, married woman, living in a home with a Great Uncle who is trying to ward you off, as he is convinced Martin is none other than Nosferatu.  This is pretty interesting stuff here and it’s all put together by one of the Horror genre’s greats, George A. Romero (Night of the Living Dead, anyone?). You never really know if you’re watching a vampire or just a crazy guy who believes he’s a vampire. We see scenes in black and white of events that would have to happen a long time in the past, but we’re never told whether or not these are Martin’s memories or figments of his imagination. Add that to the fact that he tells Christine, in passing, that he is 84 years old. What… What is going on here. A good movie – that, my friends, is what is going on here. 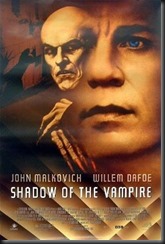 Set during the shooting of the iconic 1922 Vampire film, Nosferatu, Shadow of the Vampire tells the tale of the dangers that can face you when you look for too much realism in your films. Staring John Malkovich as famous German Director, Frederich Wilhelm Murnau, during his filming of the above mentioned Nosferatu. Taking his cast and crew to film on location in Czechoslovakia, where he instroduces the rest of the crew to the star of the film, Max Schreck, whom, Murnau explains, will be in character for the entire time of the filming, and will only be seen at night. Schreck is played masterfully by Willem Dafoe. When members of the crew start to disappear, we see interesting back and forth  between Murnau and the Vampire, in which we find out that Murnau has made a very interesting and questionable bargain with the Vampire: His good behaviour for the life of one of his cast. Shame it’s so difficult to deal with the undead.

Shadow of the Vampire puts a new twist to the Vampire movie: it’s a movie about the making of a vampire movie – wherein the Director of said movie chose to hire a real Vampire to play the title role. The cast is composed of a lot of “A” Listers and they all do an amazing job in this unusual film. The story is gripping, and the switch between regular filming, and the representation of what Murnau is capturing on his cameras is a great way to capture the dualism of the story. After watching this, I was compelled to watch the original, 1922 Nosferatu the very next day. If you enjoy horror movies, plot twists and damn good acting then you owe it to yourself to watch this film. Check out the trailer below: 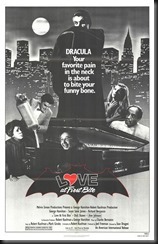 If you like horror parodies like the Scary Movie series, but haven’t seen 1979’s comedic horror classic, Love at First Bite, then you owe it to your self to do so. Starring George Hamilton as Count Dracula, who is forced from his home in Transylvania when the communist government decides to take his castle and convert it to a gymnastics training ground. Taking this as an opportunity to meet the woman he believes he is in love with (from afar), model Cindy Sondheim (Susan Saint James). Setting himself and his bungling bug eating servant Renfield (Arte Johnson) in a New York hotel, and goes about trying to meet Cindy. While in the Big Apple, Dracula learns of the wonders of the blood bank (“We are here to make a withdrawal”), and the dangers of drinking the blood of winos among other things. While winning over Cindy is a cinch for the master of persuasion, Count Dracula, he soon finds himself in a silly, on going battle with Cindy’s psychiatrist and non-committal sometimes lover, Jeffrey Rosenberg (Richard Benjamin), Grandson of Dracula’s nemesis, Van Helsing. Fortunately for Dracula, Rosenberg is nowhere near the Vampire hunter his Grandfather was, and his attempts to out or attack Dracula are absolutely hysterical.

This is a silly silly movie that I absolutely adore. I have watched this movie many times and will watch it again – It’s just plain fun. I say watch this movie.