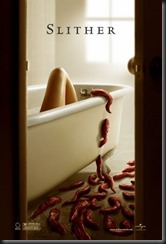 2006’s Slither does something very difficult: it manages to mix horror with Science Fiction (Sci-Fi), and adding a large dose of comedy…and gets it all right. I’ve reviewed the move in the past (here is the original, tiny write up: Slither 2006). It was so good, that I decided we should watch it again, and maybe put a little more effort in the write up this time.

Starring Canada’s own (hell,we were in the same high school at the same time), Nathan Fillion (Firefly anyone?), as Chief of Police of the town of Wheelsy, South Carolina, where a meteorite crashed to earth, carrying an alien life form. Shortly after it crashes to earth, local, well to do guy, Grant Grant (played by Michael Rooker), gets taken over by the creature after poking at the gelatinous, pulsing mass in the nearby woods (after almost, but not quite cheating on his wife). Soon Grant starts craving fresh, raw meat, and also starts mutating. When Grant’s lovely wife, Starla (Elizabeth Banks), see’s a misshapen Grant, he explains he had a reaction to a bee sting. Well, soon other things start happening, including the disappearance of neighbourhood pets, as well as Barbara, a local drinkin’ floozy…

Well, you see, Grant is now the host of an alien intelligence who spreads through taking over individuals, either through assimilation or through infection via a parasitic worm/slug like form. The creature can also use a life form as a host to breed the aforementioned worms/slugs…and it does – boy does it ever. Of course this turns in to a battle of a few against a lot, and is tense and action packed… as well as a lot of always cool grossness. The creature design is fantastic, and the whole cast does a great job in creating what feels like a heartfelt homage to the alien invasion/creature films of the 1950’s and 1960’s. This is a great Sci-Fi/Horror/comedy that I strongly suggest you check out.

This is a poorly made movie about a young, mentally challenged boy that is being raised by a single mom. The mom has a new boyfriend that she doesn’t realize is a murderous thug who manages to wrangle himself into living with the pair. The boy, obsessed with Easter, doesn’t like Mom’s new boyfriend, and confides this and other things to his pet bunny, given to him by a homeless man, a few days before Easter.

On Easter day, Mom has to work a double shift and the boy is left in the care of the boyfriend who decides that this is a great time to party, and offers up the boy to a pedophile drug dealer he knows in exchange for drugs and money. The attempt to rape the boy is foiled when a mysterious stranger in a bunny masks starts killing all the degenerates. So, bad guys/gals die, a secret is revealed, then another and then everyone (who’s still alive) live happily ever after.

Yeah… screw that shit. This is crap. Reading the reviews on imdb.com makes me believe that the cast wrote most of the reviews. This is a waste of time with little or no redeeming values. Watch it if you want.

Here is the stupid trailer:

Watched the 2006 Horror/Sci-Fi (and kind of Zombie) flick, Slither the other day and absolutely loved it. Starring Michael Rooker, Nathan Fillion and Elizabeth Banks, this is a wild ride of a film. An ancient alien life form falls to Earth meteorically, and takes up residence inside Michael Rooker’s character, eventually transforming him into a carnivorous fleshy tentacled monster that take over the town by hijacking the residents by using a grossly interesting method (watch the movie to find out how). There’s a lot going on in this movie and I enjoyed it from start to finish. Unusually (when you take in to account the movies I have talked about in this blog), this movie has a decent budget, cast and effects. I unreservedly suggest this movie as a must watch if you like sci-fi horror flicks, that is.