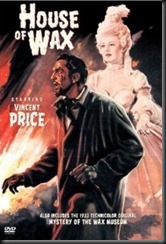 The first time I watched The House of Wax was around 1984 when a local theatre was showing classic 3D films each Friday for a few months. I was 14 at the time and thought I was in for a hokey experience – what I ended up with was a new appreciation for the classics, for 3D cinema (when done well), and especially for Vincent Price.

Released in 1953, it was a remake of Mystery of the Wax Museum without the humour of the original (thanks Wikipedia). The film was one of the first colour 3D movies from a big American studio, and apparently one of the first with stereo sound… pretty innovative for 1953. The movie tells the tale of Professor Henry Jarrod (played by Vincent Price), an master in the art of wax sculptures and his quest for vengeance against his financial partner,  who burns down the Wax museum to recoup his investment through insurance. In an attempt to stop the blaze,  Matthew Burke (played by Roy Roberts) knocks out Jarrod in a fight and leaves him to burn in the fire.

Thinking Jarrod perished in the fire, we learn that Burke collected the insurance payout through a conversation with Burke and his girlfriend/Fiancé at dinner. Burke also tells her a tale of how sad he was at the loss of his friend and partner… a lie of course.

Well, it turns out that Jarrod was not killed in the fire, but was burned, leaving his hands useless. He has decided to create a school to teach his art and to recreate a new wax museum, but this time dedicated to the macabre, depicting true life horror scenes in wax. Working through the hands of his students, he even goes as far as to model the faces of the wax figures on victims of crime in the news papers.

Well, all is not as it seems, and a shadowy figure is seen leaving the wax museum/school and descending on Burke, murdering him while making it look like a suicide through hanging. We catch a glimpse of the killer who is horrible disfigures – it is the true face of Jarrod, dis-figured in the original wax museum fire. Shortly after the suicide is reported in the news, Burke’s body disappears, and a new exhibit opens in the museum depicting Burke’s apparent suicide with a picture perfect model of Burke as the centerpiece. Next to go is Burke’s fiancé who is murdered in her sleep by the grotesque Jarrod. Almost caught, he is seen by a flat mate of the now dead lady. When she describes the horrible face of the killer, she is not initially believed. Soon Burke’s Fiancé’s body disappears and a new exhibit depicting Joan of Arc at the stake takes it’s place with a model that looks exactly like the freshly dead woman.

What’s happening? Burke, enraged and crazed after the loss of his life’s work and his disfigurement in the fire, has decided to get revenge on his former partner and all those that may stand in his way. He has taken to creating wax sculptures by covering the bodies of his victims in wax and making them the centrepiece of his works. The burn make up on Price, in my opinion looks great and the performances by all are top notch. I really don’t think that it should be considered scary by today’s standards, but is a classic in any case. The movie has recently been re-released on Blu-Ray and in 3D and I must say it looks fabulous. This is a movie that I heartily suggest you watch, even if you’ve seen it before.

Check out the Trailer below:

A silly movie from 1983, Spacehunter: Adventure in the Forbidden Zone plays homage to the pulp Sci-Fi movies and stories of yesteryear. A simple story: a commercial transport ship (like an ocean liner in space) gets hit by debris while travelling near a nova and people have to abandon ship – Salvage operator Wolff (played by Peter Strauss) heads out to rescue a group of three women that escaped in one pod and landed on the bleak, forsaken plague planet Terra XI.

Upon landing on the planet Wolff with his Engineer,engineer Chalmers (the attractive Andrea Marcovicci), they find themselves in the middle of a pitched battle between two factions of natives for the control of the stranded Earth women.

Before Wolf is able to rescue them, the women are captured and taken to the “Chemist” to be prepared for the pleasure of the Overdog (played by Michael Ironsides), the leader of the most powerful faction on the planet. During the battle Chalmer is “killed” (watch it and you’ll know why there’s quotes around killed), and Wolff meets a teenage “Scav” (short for scavenger” named Niki (played by Molly Ringwald) who agrees to be his guide… well, more accurately forces herself in as guide. Soon they come under attack of a large bulldozer type vehicle, which they find is being codriven by an old acquaintance of Wolff’s from the Military, Washington (played by the venerable Ernie Hudson), who reveals that he too is there to rescue the women and collect the reward (300 Mega credits). Despite refusing Washington’s suggestion that they work together to rescue the woman, eventually circumstances for the trio to work together to stay alive and battle the Overlord and his minions.

This truly is a simple, silly film that is just plain fun. It’s fitting that this was originally released in 3D, during the brief 3D resurgence that happened in the first half of the 1980s, as many of the cheezy 1950’s Sci-Fi films that it pays homage to were originally released in 3D. There’s not a whole lot of scenes where things are thrust into the views… err.. view, so it doesn’t lose anything being watched in 2D. I recommend this movie if you want a break froim movies where you need to use your brain, and If you like silly films (and if you don’t, why are you on this blog anyway?), then I think you might like this light adventure.