Dragonslayer (1981) – To This Day, Still One Of My Favourite Movie Dragon Designs 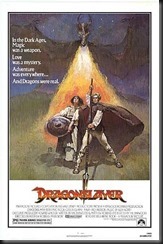 1981’s movie, Dragonslayer, blew my twelve year old mind when I fist sat through this movie with my good friend, Robin. Now, 23 years later, I am still liking this movie.

Staring Peter MacNicol (better known to some as the short, curly haired lawyer, John Cage, from the TV show Ally McBeal), as Galen Bradwarden, a young apprentice of the Wizard, Ulrich of Craggenmoor (Ralph Richardson), who takes up the Wizard’s quest to slay the Dragon, Vermithrax Pejorative, after Ulrich is apparently killed while proving a point by brutish henchman Tyrian, right hand of King Casiodorus (Peter Eyre). Ulrich had just accepted the task of killing the Dragon when a delegation of peasants approached him asking for his help. Kind Casiodorus had implemented a lottery, offering up a female virgin each year to appease the beast. The people have had enough of the Lottery and living under the fear of the Dragon, and are at their wits end. Now seeing their hopes die almost immediately, with the death of Ulrich, they head back to their town. Soon, though, they are joined by Galen, who has just inherited the Wizard’s magic amulet, who states that he will take up his former Master’s task and slay the Dragon himself. Along the way he risks strong resistance from the King, who believes his lottery system is best for his people, and is temporarily jailed so as not to meddle with the lottery. It’s not until the King’s own daughter is in jeopardy that the King releases Galen in the hopes Galen can actually end the Dragon menace. Along the journey, Galen discovers one of their party is not what they seem (no, not a traitor)…

So, this early 190’s fantasy film still looks beautiful (not something that most movies with special effects from that era can say), and is still interesting. As stated in the title of the review/write up, the Dragon in this movie is still one of my favourite designs of a Dragon in movies, ever. Maybe it’s second to Smaug, now, though I’ll decide that after the third and final Hobbit movie. Still, this movie, in my opinion, still hold up well. I heartily suggest this as a must watch for any fan of the Fantasy genre.

So I found my self with a little extra time on my hands and decided to watch the 1995 version of the Rodger Corman classic, Piranha. Now, you might be thinking that you read one, no two reviews of Piranha on this blog already. You’re right, and now here’s a third.

This 1995 release has a new story (mostly) and new actors but reuses the actual piranha attack clips from the original 1978 release – Hey, it’s good to recycle, right?.

There really isn’t anything in this version that screams must watch, though it is fun. One little tidbit: the young daughter of the main character, Paul Grogan (played by William Katt of The Greatest American Hero), is played by a very young Mila Kunis. I did not know this while watching the movie, and despite not having a lot of lines, I was thinking that this child actor is the only one in the whole movie that seems believable. Looking up the cast after I was done watching is when I found out it was Mila – good job!

So, to summarize: This version of Piranha doesn’t bring anything new to the table an early performance by Mila Kunis), but it is fun nonetheless,and if you like these B-Movies then this one is as good as most and might bring a smile on a boring afternoon.

Check out the trailer below, and below that a link to the entire movie, for as long as that works (please let me know if the link is dead!):