Win a Very Special Edition Of The Toxic Avenger… The Easy Way!!! 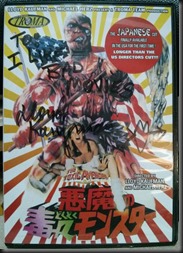 Hey, I am giving away a most excellent copy of the Japanese cut of the 1984 cult classic Troma film, Toxic Avenger. This is the one that really put the Troma Team and Lloyd Kaufman on the map and I want to give you a copy of the Japanese cut of the film (with about 6 minutes of footage not available anywhere else), autographed by the great Lloyd Kaufman. Just tell me the first movie that I ever reviewed on this site, then go to colexions.com find search for member Corey Buckner and tell me any three items in his collection. Email your replies to catfishkempster@gmail.com. The contest will run from August 6, 2014 to August 31, 2014 and If there are multiple correct entrants, then the winner will be chosen from them. PLUS: You also have a chance to win an additional DVD (of my choosing), but you’ll have to watch the video to find out how.

And when you’ve done all that, why not go to the Troma store and buy everything there and make Lloyd Kaufman and the Troma Team ridiculously rich for the almost 40 years they have put into the business and Tromaville. Do it for Lloyd, and do it for Toxie!!!

Ah, Troma… The company that brought us the Toxic Avenger series brings us this: Terror Firmer.

It’ s the story of a low budget, blind and oblivious film maker, Larry Benjamin and his crew trying to make a Toxic Avenger film. Cast and crew start dying off – victims to freak accidents and a seemingly female serial killer. Once again, I will let Wikipedia do the talking – here is what Wikipedia says about the plot:

This is the story of a New York low budget film crew, led by their insane and egostical blind film director, Larry Benjamin, who is trying to create a work of art. In addition to the typical trials and travails of a Troma set, the crew is preyed upon by a sexually conflicted, bomb-toting serial killer. Among the large poorly-paid film crew, the movie centers mostly on production assistant Jennifer, who struggles to do her job while deciding between the two men in her life; the straight-laced boom operator Casey, and the rebellious special effects operator Jerry. The love triangle intensifies as the dead bodies mount with increasingly brutality. At the climax, the entire film crew bands together (both physically and sexually) against the mortal threat in their midst.

This is a Troma film, which of course means it’s weird, crude and dumd. And from Troma, that’s aa good thing. The only issue I had with this film is the fact that I watched the uncut version which was easily 20 minutes too long. If you like Troma films, then this is for you – just watch the regular version.

And you can watch the whole film right here:

Just finished watching the Troma film, Father’s Day and my head is still spinning.This Canadian production is what I like to call Nouveau Grindhouse: new movies with an intentional gritty,dirty and cheap made for the 1970’s Drive-In feel.

This film is brutal, gory, gruesome and socially unnerving… and funny. A supernatural gore-fest sexual comedy? I don’t really know how else to describe it. The basics? fathers are being killed, a young punk that is being harassed by a jerk cop, , a young, confused and wimpy priest, an ex cop, just out of jail for a revenge killing that went wrong and his stripper/hooker sister have to defeat the Satanic killer of those fathers. Fill in the middle parts with gore, horror, incest, murder, rape and some laughs. Yeah… that’s the ticket.