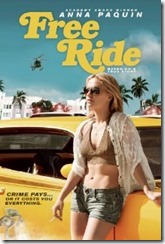 2013’s Free Ride stars Anna Paquin and is based on a true story as a mom in the 1970’s that escapes an abusive relationship with her kids and heads to Florida. Once there she starts working for a major pot importer whom she meets through a friend. She is raising two daughters and not doing a particular job about that. Stuff happens, people get hurt/go to jail etc…

Okay, the acting isn’t bad in this film, but the story is freakin’ boring. Coming in at only an hour and twenty-six minutes, it felt like a damned eternity. You know, just because you have a story to tell, it doesn’t necessarily mean you should, We learn that the story/movie is written by one of the daughters… Next time stick to your diary, as this is a waste of time.

Check out the trailer below, but don’t be fooled by it as it’s all smoke and mirrors – the trailer is all you really need.

I am getting old. Really I am. I just can’t believe it was 29 years since I watched this film. That’s a long time. I’m glad it was worth the wait.

1982’s quirky black comedy, Eating Raoul is a charming little film about an odd, prudish couple, Paul and Mary Bland (played by Paul Bartel and Mary Woronov) down on their luck, with a dream of someday opening a restaurant. When Paul’s cultured, if snooty attitude towards a specific wine gets him fired from his job at the liquor store, that dream seems to fade even more. That is until they accidentally kill a swinger (or two) and realize there’s big money in luring perverts to their place and killing them and taking their cash. Heck, they even get good at it.

Things start going so well that they decide to get new locks put in when they find a flyer for a discount lock service. They call the number and shortly Raoul of Raoul’s Discount Locksmith (played by Robert Beltran who later played Chikotay on Star Trek: Voyager) shows up, scans there place, cons them into new locks and leaves. Later that night, after a busy evening of bonking perverts over the head and taking their money, Raoul reappears with the express intent of robbing the Blands while they sleep. The Blands wake up and catch Raoul in their kitchen, in the process of stealing Paul’s expensive wine collection. The Blands angrily confront Raoul demanding their money back. That’s when Raoul let’s them know he knows they killed and robbed people for the money – the bodies were pretty much in plain site due to an issue with the garbage compactor. Instead of getting ugly, the mood changes quickly when Raoul offers a deal: he’ll get rid of the body and cars of the victims for a profit that they all share. Now they’re in business. Like many businesses, there’s a little back stabbing, adultery, attempted murder and eventually cannibalism.

This really is a quirky, low budget film. It’s kind of subdued and slightly abstract film, and despite the high body count, there’s absolutely no gore. That’s not a bad thing, just a weird thing. I like this film quite a bit and recommend it, though I know I’ll get a few emails saying it sucked. Too bad I l liked it.