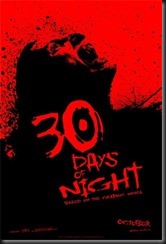 So this week is turning out to be pretty good week for movie watching for me. Three days in and so far three good movies!

30 Days of Night tells the tale of a Vampire outbreak in the little Alaskan town of Barrow, during the 30 day polar Night (in the Arctic, there is a period each Winter where the sun sets and does not rise again for 30 days, due to the axial tilt of the planet Earth). A great time for light fearing creatures of the night. Just before the beginning of the long night, strange things start to happen. Peoples cell phones are going missing, and all means of escape from town are either vandalized or destroyed (including dog sled). Once the night hits, it gets weirder when the town’s power is cut. Investigating, the Sheriff, Eben Oleson (Josh Hartnett), discovers that the crew at the power plant have been brutally murdered and the plant vandalized. You see, the Vampires have planned for this night… This is going to be a gory, un-dead versus the unsuspecting soft, humans. Of course there is the hiding to stay safe while one by one the survivors numbers shrink situation – like there is in almost all these movies.

These are dark, dirty, evil vampires. They seem much closer to a complete, separate species than just turned, ancient humans. That said, these Vampires can turn humans into Vampires also, but I did get the feeling that some of them may have been old, greasy dirty powerful killer hominids. I thought it was an interesting take (especially the use of a separate Vampire language). This is not a perfect movie, but it is an enjoyable, action and gore filled bloodfest that I thoroughly enjoyed. Have I seen better Vampire movies? Sure, but I would watch this again and not feel like I wasted my time. Check out the trailer below and decide for yourself if this movie is for you:

A Nightmare on Elm Street Vs. Friday the 13th – Two Iconic Horror Franchises

Happy Hallowe’en my fine feathered freaky friends. Today I would like to briefly discus and compare two of the biggest horror franchises of all time: A Nightmare on Elm Street and Friday the 13th. I have recently completed rewatching both series, and while I love both, I would say both are not equal. Both series are iconic: show someone a cheezy goalie mask or a glove with  knives as nails and most likely they will know what movie franchise it came from.

Friday the 13th, the original movie, was released in 1980, taking the horror world, and pulp culture in general by storm. It tells the story of a young, mentally challenged boy who drowned due to the negligence of counsellors at the summer camp, Camp Crystal Lake, and the revenge extracted by is crazed mother. This movie introduced us to the character of Jason Voorhees (just Jason from now on), but what many people forget (or don’t realize) that Jason isn’t even in this first film. It’s the second film that we finally get to meet Jason, but even then he’s not wearing his Goalie mask – he acquires that in the third film when he takes it from the ”Prankster” of the group. The Friday the 13th Series continued for 11 movies, including the cross over film Freddy Vs. Jason – 12 if you include the 2009 remake (or re-imagining). Along the way Jason evolves a little, going from a creation of his mother’s sick and twisted mind to a burlap sack wearing killer, then gaining his mask. At one point he’s able to from body to body as an evil spirit. Hell – he even ends up in space. Some things that don’t change are the facts that no matter how slow he lumbers, Jason will catch his victim and no matter how dead Jason seems to be – he’s not. Jason is a relentless killer, but not an intelligent killer. He gets the job done, but he doesn’t think much – but he doesn’t need to. At first it’s not apparent that he’s a supernatural being, but soon it becomes apparent that he’s not mortal, seeing that he cannot be killed. Many, if not most of Horror’s cliches have originated from this series. He’s the original unkillable killer.

A Nightmare on Elm Street debuted in 1984 and introduced the world to Fred “Freddie” Krueger, a vicious child killer, murdered in a fire by residents of his town seeking justice when a legal loophole set him free. Freddie has found a way to infect the minds of his victims by entering through their dreams. Sporting his now famous gloves with knives on the tip of each finger as his primary weapon, if Freddie kills you in your dreams, you’re dead in real life. The Nightmare series had 8 stand alone films as well as the crossover film, Jason Vs. Freddie and a remake/reimagining of the film from 2010. Freddie, from the start is a supernatural being that haunts the dreams of his victims, and unlike Jason, has a working mind – he’s devious, and taunting. Yes he has a working mind, though it doesn’t seem to work that well.  Just a side note: the original film starred a young Johnny Depp – He dies in a extremely bloody scene.

Both series are great. Sure, not each movie of each series is great (hell, some are just downright bad), but as a whole, each are important to the horror genre – changing the entire genre in their own ways.I have to say I prefer the Friday the 13th series over the Nightmare series for one main reason: Remember when I said that Jason was mostly mindless and Freddie had a mind? Well Freddie’s mind, while working, is a silly mind. His taunts are silly and his puns are worse. With Jason, he’s just going to kill you – he’s not going to make some dumb, silly pun or taunt you in a ridiculous manner. He’s just going to keep coming until he gets you. Still – I like both series and say that if you are a fan of horror then you should watch both series. If you don’t then I argue that you really can’t consider yourself a connoisseur of the genre.

What’s your view on the two series?

I remember watching this back in 1984 mostly to see the “hot chick” from my then home town Edmonton, Catherine Mary Stewart, who played the lead character, Regina.

The gist of this movie is this: A previously unknown comet makes a swing past earth, and the resulting meteor shower releases some sort of dust or radiation that turns anyone who wasn’t protected behind steel into dust. Most of the world who turned out to watch the comet disappeared, and the few who survived are turning into Zombie like creatures as they too slowly disintegrate  Meanwhile, two hot sisters that survived the night team up with a low budget Eric Estrada like good guy dude try to survive. Add to the whole mix a group of high tech survivalists, some thugs and you have an entertaining if mild movie.

I think I like this a little more than it deserves because it reminds me of the younger me. But even so, I think I would have still liked, but not as much. Like I said: the first time I watched it when I was 15 was to see a local girl in a movie.

Check it out yourself.