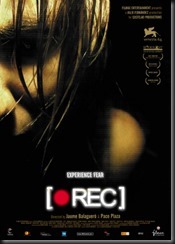 If you’ve seen the movie Quarantine and wish you had the time you wasted on that back… well I can’t help you there, but I can suggest you watch REC, as this is what Quarantine was supposed to be, as this is the movie that it was based on.

2007’s REC is a Spanish horror film that follows a reporter, Ángela Vidal (Manuela Velasco), and her camera man as they document the goings on of a Spanish Fire Hall for her show, While You’re Sleeping. At first it’s regular stuff, talking to the Firefighters about how they spend their time, what and when they eat and sleep, what they do for fun while waiting for a call and such. But when they tag along on a call of an old woman trapped, and possibly injured in her apartment, everything changes. Arriving at the apartment building, they find a police vehicle there already. The officer explains that the lady is in her apartment in the upper level of the building and that screams were heard from the suite. Breaking in the door and entering, they find the lady, distressed, and bloody, wearing her night clothes (or a slip). Approaching here, calmly and talking, trying to get her to relax, she attacks and bites the hell out of one of the fire fighters in a fit of manic rage.Everyone quickly retreats from the apartment. though one firefighter stays behind on the upper floor, and the bitten firefighter quickly falls gravely ill… Meanwhile, the residents of the building, who have been gathered in the foyer of the building are getting nervous, and tense, demanding answers. When the department of health shows up and seals off the building, preventing anyone from leaving, the tensions grow even higher. You see, there is a disease going through the place and the authorities obviously see t as a severe threat, treating it on par with a chemical, germ or nuclear threat. As time passes, the threat grows, with the already bitten and injured rising up, zombie like and attacking the non-injured. Add to this a cop that has obviously been put into a situation that is above his pay scale, things really start to fall apart, and with no end obviously in site for the trapped.  The fearful remaining unaffected people are starting to throw blame around… eventually, when a health inspector enters (dressed in a hasmat suit that makes the already frightened residents more upset), he is compelled to reveal that one of the residents dog, brought to the vet as ill, was carrying an unknown, extremely viral disease. The dog, showed the same aggressiveness as the people did once fully sickened. As time goes by more and more fall to the disease or the attacks of those already afflicted… all the while Ángela keeps filming, capturing everything, while trying to find a away out of the infected building… Trying to escape the growing hoard, they make their way frantically to the Penthouse suite, reported closed up for years by it’s owner. In the suite the reporter and her cameraman discover what may lay behind the outbreak… and something much more terrifying.

This movie, was so good. I had no idea as to what it was about, but my movie watching buddy thought it would be a good choice for this week’s theme and he was right. If you haven’t seen this gem then you should. It’s pretty short (only an hour and fifteen minutes), but so packed with tense action that it feels longer (in a good way). So, as stated at the beginning of this write up, if you were dissatisfied with the movie, Quarantine, and want to see the way it should have been see this film. Or, if you just want to watch a god movie, also watch this film.

Well, I think I should do a quick post regarding last week’s Vampire week as I have received a few emails regarding it and the choices…

I have received over 100 emails asking why I did not include the classic 1931 Universal film, Dracula, with Bela Lugosi, or even the Spanish version filmed at the same time on the same cast. Well, I have reviewed both in the not too distant past (favourable, I might add), and I thought that with the sheer number of Vampire movies, this would be a great opportunity to showcase some different films I have not seen yet (aside from Love at First Bite). And you know what? I am glad I did, as I was able to watch 7 great, and different vampire movies. To be honest, I can’t remember the last time I watched seven days worth of good films with a connected theme (aside from Tarantino week). The whole vampire myth has generated so many films that I was tempted to turn this into two weeks of Vampire films. I’m convinced that even with an additional week of movies, I would have managed to avoid watching a turkey of a movie. Yes, with this many movies to choose from, there would be no reason to watch Twilight, or anything like it.

Hell, I think a second Vampire Week should be planned! In fact, why don’t you send me your suggestions (good or crappy) for the next Vampire Week.

Send those suggestions by clicking HERE

1931’s Spanish version of Universal’s Dracula is simply a masterpiece.

Filmed on the same set as the iconic Bela Lugosi led Dracula, but at night when the main shooting was done, the makers of this version had a big advantage: They watched the original being shot and were able to improve any shots that may not have been optimum in the English cut. The acting is top notch, and the sets… well the sets are Dracula sets. The film, being in Spanish was watched with subtitles, and Spanish is a language that I sometimes find too fast for subtitles – but not this time. The pace was perfect.

Apparently the use of the sets of big, English titles to film Spanish films for Universal was pretty normal (hell, it’s a great cost cutting measure), and I am sure there must have been some abominations created this way, but as stated, this is not one. I know that Lugosi’s Dracula is a masterpiece, and I don’t mean to take anything away from that, but I would think that this is better. Significantly better.

Want an interesting look at the classic tale of Dracula? Watch this movie. HEll, watch it here, in full: