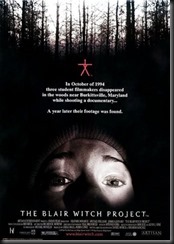 While not the first to do it, The Blair Witch Project was the first movie to really bring the “found footage” style of movie to the masses. Telling the tale of three student filmmakers (stole that line from Wikipedia), who went out to make a documentary about the Blair Witch, a legendary figure, and never came back.

The film starts out with a message stating tat the movie was put together from the footage found in the cameras after the three film students had disappeared. The three, Heather Donahue, Joshua Leonard, and Michael Williams had headed out to make a documentary about an evil witch, or spirit that is rumoured to haunt the woods outside of Burkittsville, Maryland (formerly known as “Blair”). They talk to locals who tell them the tales they heard as children growing up in Burkittsville, and how the witch tale was used to keep kids in line. They also hear the tail of a tragedy that happened in the 1940s with the disappearance of several local children, as well as several men from the community. Well, the three decide to head off into the woods in search of the Witch, or at lease evidence of such. Soon they find themselves hopelessly lost and it seems the focus of some weird nocturnal activities. They hear weird sounds at night and fins strange constructs of twigs and wood as well as neatly stacked rocks around their tent in the morning. As time passes and they become more and more loss, the individuals start really showing their stress in the way they interact with each other. The weird sounds and such continue and increase, adding to the stress of the group. When one member of the group disappears in the night, and fails to return, it just gets worse. You know things are just not likely to work out for our little group of film makers.

The Blair Witch Project did a great job of capturing the initial enthusiasm of the three, as well as there slide to desperation , and breakdown of the three main characters. They manage to remain believable (for the most part), and while you may grow frustrated with them at times, it’s at times where youy as a watcher are supposed to get frustrated with them. Is this a good movie? Damn straight.

Check out the trailer below, and if you haven’t seen it yet, go out and get yourself a copy. 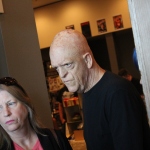 Thank you to everyone that made the Calgary Horror Convention an AMAZING event. A fantastic lineup of guests, including a reunion of the cast from the fantastic 1990 remake of Night of the Living Dead: Bill Moseley, Tom Savini, Patricia Tallman and Tony Todd,

Tony Todd posing with a friend of mine

Looking hotter than ever! 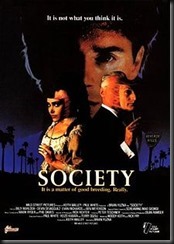 John Dies At The End is a weird tale of a couple of drop outs, exposed to a weird drug that allows them to see into another dimension and leaves them as protectors of our world from a possible invasion for that said dimension.

A movie by Don Coscarelli, the man who brought us the masterpieces Bubba Ho-Tep and the Phantasm series (amongst other films) has created a stylish, surrealistic weird movie that kept me confused and riveted at the same time. A couple of dope smoking, drinking roommates, Dave and John attend a big party where they meet Robert Marley who introduces them to a new drug with the weirdest of properties: a lone with distorting time, it also allows you to see into other dimensions and the evil that lives there. The drug also blurs the line between life and death. In fact, there are several times when it is not obvious if the characters on screen are alive or something…else. Throw in a police officer who has also seen a glimpse into this world and is doing his best to removea any trace of it, by any means possible. The story itself is told as a flashback while Dave relates the story to a reporter, Arnie Blondestone (played by Paul Giamatti).

This is really a hard movie to describe because it’s really not like anything I’ve seen before. All I can really say is that if you have an open mind for weird (but good) movies, then you really should see this film.

The Man With the Iron Fists is a 2012 American Martial Arts film, set in 19th Century China (in a town called “Jungle Town”), and stars RZA, Russell Crowe, Lucy Liu, David Bautista among many others.

This film is very stylish and tells the story of a man getting vengence on the murder of his father, the leader of the Lion Clan, by his adopted son, Silver Lion. To do the movie a little more justice, here is the first paragraph of the Wikipedia plot summary:

In nineteenth century China, Jungle Village is home to several warring clans. The village Blacksmith creates deadly weapons for the clans, intending to use his payments to purchase the freedom of his lover Lady Silk, and leave the village. The region’s governor tasks the Lion Clan’s leader Gold Lion with protecting a large shipment of gold that must pass through the village. Gold is betrayed by his lieutenants Silver Lion and Bronze Lion, who plan to steal the gold. They use the chaos of a fight with the Hyena Clan to allow their co-conspirator Poison Dagger (the governor’s aide) to assassinate Gold; Silver becomes the Lions’ leader. Gold’s son Zen-Yi learns of his father’s murder and sets off to the village to seek revenge.

Man – this is a stylish Kung Fu fest like I’ve rarely seen. Lots of flying around, and silly amazing moves. If you’ve seen Hidden Dragon Crouching tiger (or whatever it’s called), then you know the style of martial arts in this movie. Now, while a Kung Fu movie, RZA throws in a generous amount of Steam Punk (something I enjoy a lot).

While not perfect (or even close), I found this movie quite enjoyable. In certain ways, it reminded me of something Quentin Tarantino might create. I say watch this movie.

The Ladykillers (2004) – Compelling Weirdness from the Cohen Brothers

Watching this film reminded me: the Cohen Brothers are insane – beautifully insane. I swear these guys crap masterpieces!

A remake of the 1955 movie of the same name, this movie stars Tom Hanks and a cast of “that guys” planning an ingenious heist from a riverboat casino.

This a seriously fun and dark movie. tom Hanks plays a swarthy, kind of charming professor that seems a throwback to the Antebellum times, and is the mastermind behind the heist. Hanks’ character has gathered a group of men that all have specific specialties that they add to the group as a whole. Their plan is to tunnel into the cash room of the casino via a tunnel they dig from the root cellar of the sharp, elderly lady Hanks’ character had rented a room from.

It’s a bit of a crazy plan with some very funny twists and turn that leave you wondering and laughing.

This is definitely a film for Cohen fans and if you don’tnormally like their work then this is not for you. That said, if you do, then definitely watch this… then go and watch the 1955 original – it’s also great (and star s Sir Alec Guinness).

Holy freakin’ crap, what a wild ride this 1992 Peter Jackson film is! This is a Zombie movie that reaches new levels of gore that I have never seen before.

I really can’t describe this film other than using one word:

More blood and gore than I have ever seen in one movie, and yet, Peter Jackson made a good movie and not JUST a gorefest.

The film takes place in 1957 New Zealand, and involves some of the most decrepit, funny, violent and weird Zombies and Zombie action ever filmed. These are disease/plague Zombies and they spread through bites starting with the bite from an evil hairless rat-mokey in a Zoo (the movie starts with a Zoo official taking the

monkey from Skull island against the wishes of the angry natives of said island) – wait until you see the creepy monkey this – wow is all I can say about that freaky creature.

I’m not going to tell you any more about the story, because I want you to see this film. I will mention that this film has the greatest lawn mower scene ever… EVER!

It turns out that the whole damned movie is also available on Youtube, so if you are impatient, you can watch it there.

See this movie and then let me know what you think.

And here’s a link to the whole movie (for as long as the link lasts):

Freddy brings Jason back from ummm… Wherever Jason goes between movies, in order to start a killing spree on Elm Street to revive the memory of his own Killings, so as to plant himself in a fresh generation of youths – but Jason will do as Jason does: KILL KILL KILL!!!

A silly, but fun hack and slash-fest from start to finish, the film kept me going. I like this film quite a bit. Jason is really on 10 in this and he goes absolutely bat-shit crazy at a bush party – so awesome.

Freddy himself is building strength through the first half of the film, but once he’s “powered up” he get’g killing in fine Freddy form.

Everything culminates in a giant Feddy Vs. Jason Battle that, aside from a really stupid pinball moment (you’ll know it when you see it), that absolutely ROCKED!

If you like these movies, then watch the damned thing!!!